Fighting the urge to keep up with your rich friends 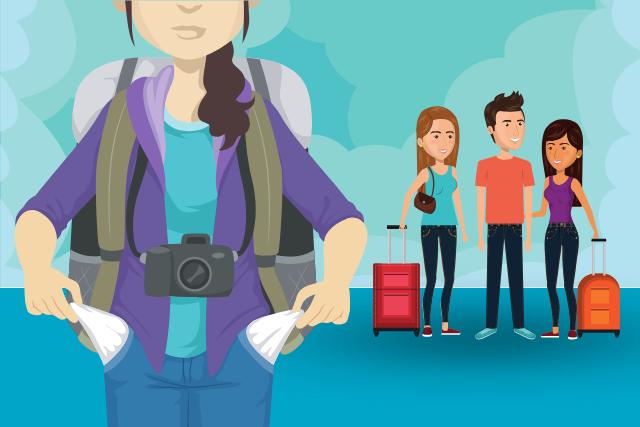 Having friends who are seemingly made of money can force you to confront thoughts about your own financial situation. But do you really know what's going on in the bank accounts of others?

Do you ever look at your friends’ spending habits and think “how the heck did they afford that?” You’re pretty sure they make around what you do. How are they able to spend that kind of money?

You’re not the only one who feels this way.

You’re not a bad person for feeling competitive. Envy is a healthy human instinct that drives aspirations, motivation and goal setting. However, this instinct can become unhealthy when your thoughts become clouded with thoughts of “why shouldn’t I have that?” and “why should they have so much?" Toxic feelings like this can force people to spend outside of their comfort zone to satisfy nagging worries that they're not "keeping up" with those around them. A 2008 study published in the Journal of Consumer Research found that when people feel like their social power is being threatened, they are more willing to pay more for high-status goods to compensate for their lower status. Simply put, seeing someone else make big purchases can make you do the same. That's a slippery slope, my friend. A 2018 study by the Federal Reserve Bank of Philadelphia revealed that neighbors of lottery winners are more likely to go bankrupt after seeing their peer’s rise in affluence. A similar study found that one in five Americans admit to doing home improvement projects just to one-up their neighbors. A little bit of envy is normal, but if you let jealousy weigh you down it can wreak havoc on your pocket book and relationships.

There's no way of truly knowing what your friend's financial situation looks like. If you’re ever feeling the urge to spend foolishly to mirror someone else's lavish lifestyle, consider this...

Your rich friends could be making a painful trade-off you can’t see.

Most people want to broadcast their positive qualities to others. You only see the best aspects of other people’s lives. Comparing elements of your own life to the highlight reels of others can spark jealousy. Recognize that you’re only seeing a few pieces of a much larger picture. The reality is that all nice things have a cost. An outwardly extravagant person could be drowning in debt or spending down to their last penny every month. They might be a slave to their paycheck, working a miserable, demanding job that they must keep to pay the bills. They might spend a lot of time away from home and use gifts to themselves or family members to make up for it. The money could be coming from affluent parents who hold it over their head and guilt them into doing things they don't want to do. The point is, a frivolous life isn’t always a comfortable one. You can’t have big, shiny things without paying for it somehow—the cost being time, energy, relationships, or an uphill battle against debt. These are real, painful costs that you don’t want in your life.

Just because someone spends a lot of money, doesn't necessarily mean they're rich. Even the lowest-income families spend 40% on luxuries they don't need. People make spur-of-the-moment purchases on big ticket items all the time.

Many “rich people” steal from their future to satisfy the now.

Nothing is worse than sitting at your work desk on a Tuesday, opening Facebook and seeing yet another picture of your friend in paradise. That’s her third trip this year and it’s only May! Don't assume people are rolling in dough just because they take nice vacations. USA Today reports that 46% of people who take vacations come home with credit card debt. According to Experian, the most common sources of credit card debt are hotels and airfare, followed closely by entertainment and dining. Many people go into debt to create a lifestyle they want, but can’t afford at the moment. You’re better off not following that path. Sure, booking the presidential suite at a fancy hotel is fun, but the rush is fleeting.

Expensive things won’t make you, or anyone else, happy.

Buying shiny, new toys may bring you a moment of joy, but research shows that the happiness associated with living large rarely lasts longer than a few days. There will always be a better version of everything you own. Every sparkly new item dulls over time. There's nothing wrong with treating yourself to an expensive experience every now and then, but if your finances start taking a hit because of your urge to stay ahead then it may be time to rethink your priorities.

Sometimes big purchases can hurt you in a way you can't anticipate. For instance, many people move into large homes and discover that the square footage that seemed so attractive before has now negatively affected their family dynamic. More space means less common areas. When everyone suddenly has their own private area of the house, time spent together drops significantly. Parents may find it harder to stay on top of what their kids are doing when everyone is so spread out.

Comparison is the thief of joy.

People buy stuff. Get over it. Focusing on how other people spend their money doesn’t add value or joy to your life. It’s a terrible state of mind that unfairly dismisses the great life you’ve worked hard to build. At the end of the day, the race is only against yourself. You are NOT a failure if you can’t afford to splurge on music festival tickets.

Direct that energy toward your own financial progress.

Your friends aren’t going to pay your student loans or help you reach financial independence. Stop focusing on what others are doing and start trying to make little improvements in your own life. Don’t get jealous of your friend's vacation plans. Instead, start asking yourself how you can begin planning a much-needed trip of your own. There’s nothing uncool about thinking ahead. If you want to be frugal, own it. If times get tough, chip away at the costs of living with small changes like cancelling subscriptions, packing lunches for work, or waiting for items to go on sale before you buy them. Chances are there are a few areas where you can cut back that would hardly be considered a sacrifice. Saving a couple hundred dollars every month can be a game changer.

The art of saying no.

For many, the hardest part about saving money is the fear of missing out (commonly referred to as FOMO). FOMO spending occurs when people buy things they can’t afford because they're afraid of missing out on quality time with friends or a once-in-a-lifetime experience. According to a study by Credit Karma, 73% of young professionals that are in debt keep it a secret from their friends, while 27% don’t feel comfortable saying no to a friend when suggesting an activity they can’t afford. It can be uncomfortable talking to your friends about money. But the alternative—repeatedly turning down their invites with no explanation—can cause a drift in your relationship. Be upfront with the people closest to you. If find yourself in a position where you have to say no, explain to your friends that money is tight right now. You might be surprised to learn they feel the same way as you. After all, there’s no reason to be ashamed of not being able to afford a night out or an expensive trip. Have faith that your friends will still love you and be accommodating for future activities.

Rich or poor, there is always room for financial improvement. Life is a marathon, not a 100-meter dash. Think long term and focus on your own goals. One person's wealth doesn't make you poor. The next time you feel the creeping feeling of jealousy, remind yourself that there is plenty of money and success to go around.

Did you know that Louisiana FCU offers a free online tool to help members track and manage their money? Take pride in your financial progress with our online banking platform.

Did you enjoy this article? We've got plenty more where that came from. Fill out the subscription form and get notified every time we post content like this.