How men and women spend their money differently 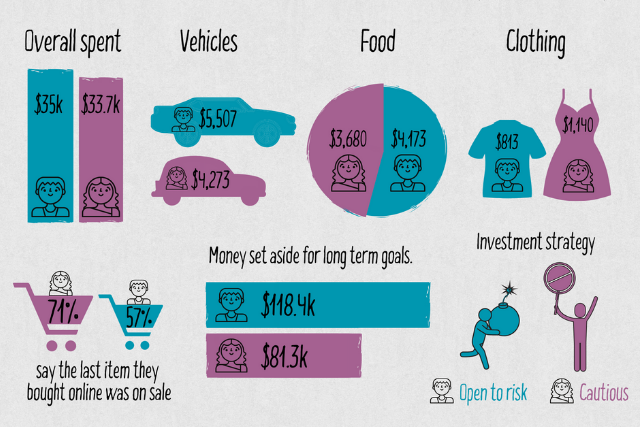 How do men and women stack up against each other in the money management arena? We pulled together dozens of studies to see where the differences lie.

A study by the Wharton School of Business titled “Men Buy, Women Shop” found that women are more likely to view shopping as a recreational activity, while most men just want to make their purchase and get out. Because of this, women may be quicker to spot a deal.

When it comes to saving up, men and women tend to have different priorities. A recent survey by The Motley Fool found that men are most likely to view saving for a vacation as their top financial goal, followed closely by paying off credit card debt. Women had identical goals, but named debt repayment as a bigger priority.

Although men and women have similar financial goals, there’s a vast difference between how much money each gender sets aside for those goals. A report by Mylo Financial Technologies found that men set aside nearly twice as much money for their long-term financial goals as women. American women nearing retirement age have an average of $81,300 in retirement funds, while their male counterparts have $118,400.

However, if you look at the percentage they save from their paychecks, women come in first place. A recent Vanguard study found that women are more likely to participate in workplace retirement plans, and that they put up to 8% more of their pretax earnings into these plans than men in the same earnings bracket.

The discrepancy between the dollar amounts saved and the percentages of incomes earmarked for savings can be attributed to the reality that the average woman is still earning less than the average man. The gender pay gap Louisiana is by far the worst in the nation with a 31% differential, according to data from the Census Bureau. Meaning women working full-time in the pelican state make only 69% of what the average full-time working male makes.

Men seem to take more of an interest in investing. 70% of millennial men enjoy managing their investments compared to just 36% of millennial women. Because of this, men tend to feel confident in their financial knowledge and are more open to risky investments. Women tend to be cautious, patient investors. Interestingly enough, while females are more likely to admit they know very little about investing, their conservative approach puts them slightly ahead of men over the long term because while they produce smaller gains, they also see smaller losses.

There’s no right or wrong when it comes to spending your hard-earned money, but there's certainly room for learning. Do you recognize any of these trends in your own life? By reviewing the numbers you can gain better knowledge of where your money is going and understand your financial mindset a little better.

Like this article? Subscribe to our blog and have great financial insights delivered to your inbox weekly.