Are You Making These FOUR Common Mistakes When Filing Taxes? 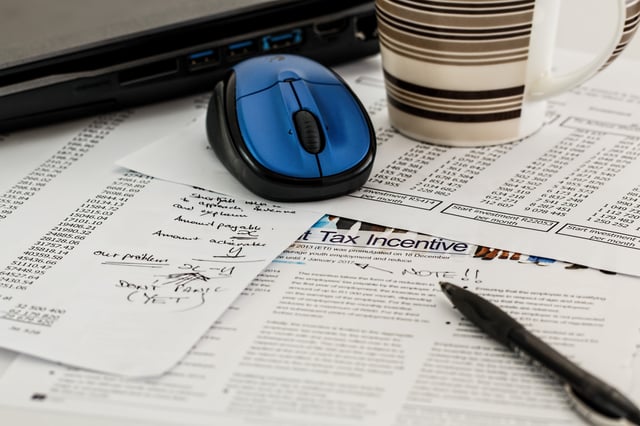 While the IRS claims that anyone with knowledge of high school mathematics (and an afternoon to kill) can do their own taxes, the hurdles to filling out a tax form are many. Let’s take a look at some of the most common pitfalls that people make while preparing their own tax returns and how you can avoid falling into them.


1. Over-complicating
Most websites will start their list of tax preparation errors by pointing out that you can deduct some medical expenses, but you should stop before you get that far. Before you start poring over receipts and charitable contributions, make sure you’re not leaving money on the table with the “standard deduction.” The standard deduction is the IRS’s baseline for what an average person spends on deductible expenses. This amount is $6,300 for a single person, $9,300 for a head of household, and $12,600 for a married couple that’s filing jointly.

The IRS has a form to help you determine if you should itemize or take the standard deduction. There are six categories on it: medical expenses, taxes, interest, gifts to charity, casualty and theft losses, and work expenses. Before you start itemizing, take a moment and make a ballpark estimation. None of these expenses can include costs that someone paid for you, like insurance in the case of medical expenses or employer reimbursement in the case of work expenses. Take a look at your expenses in these categories for December and multiply that by 12. Are the items you’re trying to deduct likely to be greater than your standard deduction amount? If not, you can save yourself a ton of time and hassle, and probably even a little money, by taking the standard deduction.

The most common source of audits from the IRS is unqualified deductions. By taking the safe route with the standard deduction, you can avoid heavy scrutiny from investigators. This simplified tax filing process can speed your preparation time and help you get a faster refund.

2. Not proofreading
The easiest place for the IRS to detect fraud is by comparing names and Social Security numbers. In 1987, the IRS began requiring Social Security numbers for all dependents claimed on a tax return. Between 1986 and 1987, the number of dependents claimed on taxes dropped by 7 million. While it might be funny to describe the IRS as eating 7 million children, the reality is that this is one of the most common and most easily visible frauds.

Make sure every person you list on your return is listed by the same name that’s on their Social Security information, and that each of those names is spelled identically. While these errors aren’t difficult to correct, they can significantly delay the processing of your return. If you recently changed your name, make sure the name change has been processed with the Social Security Administration. While small math errors will be automatically corrected by the IRS, another place to check your errors is in rounding. If you’re rounding to the nearest dollar, that’s fine. But if you’re regularly putting in items that end in five or zero, that’s a signal to the IRS that you’re working from memory, not from receipts. Make sure you check the amounts that you’re listing against the paperwork you have on hand. Resist the impulse to estimate or “fudge” your income even a little bit; all of the income statements you get are copied to the IRS, and rounding, addition or data entry errors are sure to trigger red flags from investigators.

3.Being too aggressive (in predictable ways)
If you’ve been looking for tax advice online, you’ve probably heard the sage advice that you should be as aggressive as you can be in preparing your return. If you’ve got a deduction that you think you might qualify for, you should claim it. The IRS will only investigate if it thinks it likely that the amount of money it could recover from that investigation will justify the cost. That’s true, but the IRS is an increasingly adaptable organization. They’ve caught on to the most common places where people exaggerate their deductions and can quickly identify these as ways that may trigger an investigation.
The three most common places people exaggerate their deductions are in a home office, work-related expenses and charitable contributions.

A home office must be a defined space in your home which is used exclusively and regularly for work functions. An office where you meet clients and work on your business is deductible. A den where you read your newspaper and also occasionally do a few hours of work is not. Your car is a deductible business expense when it’s used only for your business, not if it’s a family car that you also occasionally use to run business errands. If you’re going to itemize your charitable contributions, make sure you have records of the value of items you donate. Charitable contributions in excess of 5% of your income are easy places for the IRS to call for proof.

Being aggressive doesn’t mean being reckless. Be as bold as you can in claiming deductions that you can document. Don’t, though, make up or fabricate any numbers. Claim only what you can prove!

With a few exceptions, most tax incentives aren’t enough in and of themselves, to make any particular financial decision worthwhile. It’s very unlikely, for example, that you can make a charitable contribution that’s large enough to save you money on your taxes. Making your financial decisions based on the tax implications is a lot like letting the tail wag the dog.

While some decisions are only different in their tax implications, like a traditional IRA versus a Roth IRA, most of the time, your tax position should be one of the things you consider, but probably not the biggest consideration. Don’t sell assets in an attempt to change your tax burden. Fully invest in your retirement fund because of the financial security you want when you retire, not to lower your adjusted gross income. Make charitable contributions to do good in your community and make the world a better place, not to change your tax payment.

The tax code is written by people with decades of experience in financial planning from a governmental perspective. They wouldn’t be doing their jobs if there were an easy way to get out of paying your taxes. So it’s best to grin, bear it and enjoy the things your tax dollars provide. Remember, it only comes due once a year.