Dining etiquette: How to split the bill without getting shafted 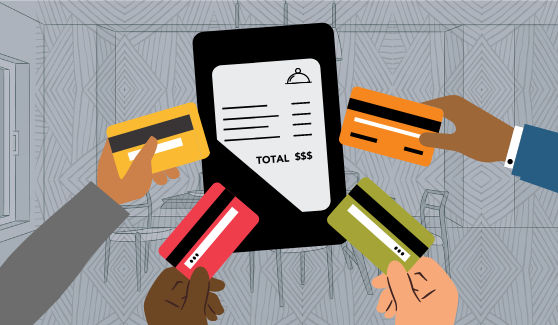 Dividing the bill after a group meal can be an unsettling experience for the unprepared, and a depressing one for those strapped for cash. When mishandled, splitting the check can force many to pay more than they expected.

If you’ve ever left a group dinner thinking it would’ve been better to stay at home and eat leftovers, then you know how frustrating and unfair check splitting can be.

How can you avoid paying more for group meals without upsetting your friends?

The answer is not to avoid group dinners altogether, but to understand what you’re agreeing to and knowing how to tactfully look out for yourself while keeping others happy in the process.

Why do some restaurants refuse to provide separate checks?

There are two commons reasons why a dining establishment might flat out refuse to split your bill.

It saves time. Splitting the check for three people on a slow afternoon is usually not a problem for servers. But when it comes to closing out a table of 20 on a busy Friday night, taking the time to split up a check can create a ripple effect. Every minute a server spends at the credit card machine is a minute where 1) other servers can't use the machine and 2) the server isn’t paying attention to his or her other customers. The easiest solution to avoid this is to simple say no to splitting checks.

The system is to blame. In some situations, a waiter may avoid splitting checks because the restaurant uses an antiquated point of sale (PoS) system that requires re-entry of the entire order to produce separate checks.

Splitting the bill is never fair.

This is a fact. If you flat out refuse to share expenses with someone else, you’re better off eating alone. That’s not what a group dinner is. With that said, there are ways to respectfully avoid being saddled with a huge bill you didn’t agree to.

Here are some tips for how a polite person (like yourself) can deal with the controversial “all on one check” scenario.

Ask the server for separate checks right when you place your order. It's not only easier for you, but the server as well.

As mentioned before, many restaurant POS systems will not itemize the cost per what each individual ordered, which is why you may often end up in a situation where you're forced to split the cost among friends.

By asking to split the check beforehand, you can establish what the payment situation will look like at the end of the meal. Use this moment to explain to the group that you're trying to save money and don't plan to order drinks or an expensive appetizer.

Now, if you felt your stomach drop at the thought of being upfront about your budget, you're not alone — but you may be surprised to learn most of your friends feel the same way.

No one will think you're cheap. And if they do, they may be projecting their own money insecurities onto you.

While it’s OK to speak up about getting a fair price, don't make things weird. What's considered weird? Glad you asked!

Deal with the drinkers.

Alcohol is the #1 culprit for cost discrepancies among split checks since it's one of the biggest expenses of a meal.

I was recently in a situation where my friend declared he should pay a smaller portion because he only ordered a $5 hamburger — failing to recognize that the three $8 whisky sours he drank cost him more than my entrée. It sounds silly, but it happens more than you think.

If you're dining with a group of drinkers and not partaking in alcohol consumption, it's reasonable to encourage those drinking to get a separate check so you don’t have to foot the bill.

Another solution is to split the total for the food evenly, but have the wine-drinkers leave the tip.

Allowing everyone to eyeball the receipt and guess what they owe almost never ends well. Nominate a big brain at the table to run the numbers and ensure the check is split evenly.

To save time, you can use mobile apps like Splitwise or Settle Up to do the accounting for you.

Sometimes it’s not the actual bill that’s hard to split, but the tax and tip. It’s proper etiquette to split tax and tip evenly among the table. While some people do mind splitting the entire bill, most don't have a problem with splitting the tip evenly, since it is only a small percentage of the total bill and makes settling the bill go quicker.

When in doubt, order last.

If you've exhausted all the options above and are still worried you'll get stuck paying for other people's expensive meals, try ordering last. After all, if you’re going to pay for everyone else’s dinner, you may as well get a good meal out of it.

No matter your approach, your goal should be to split the bill in a way that makes you and others feel comfortable. Establishing and agreeing upon the payment plan at the beginning of the meal reduces the chance of headaches and resentment later on. Don’t be afraid to take control of the situation in a polite, but direct way. If you feel close enough with people to share a meal with them, then discussing money shouldn’t be a contentious or uncomfortable topic.

If you enjoyed this article, definitely check out Fighting the urge to keep up with your rich friends, where we explore how to address jealous feelings that arise when your friends spend like they're rich.

Subscribe to our blog and have great financial insights delivered to your inbox weekly.